Scout and Misty’s personalities are starting to come through more and more. Scout is still scouting things out, but she is a little more mellow than her out-of-control sister! Misty must have springs in her feet; she is constantly jumping, bucking and running around! She particularly likes chasing after Scout and wrestling her down. These shots were from last week when they were roughly 5 to 6 weeks old. They learned how to chase and leap on things attached to sticks! 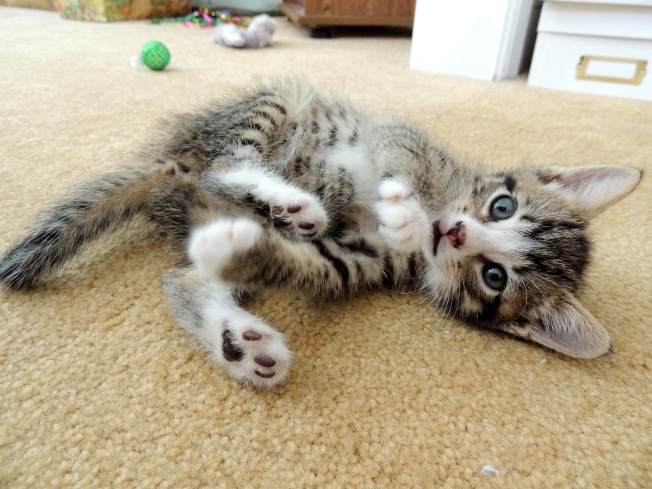 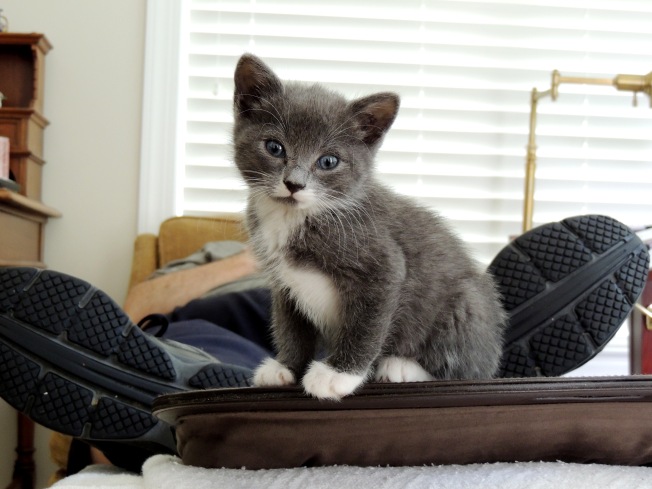 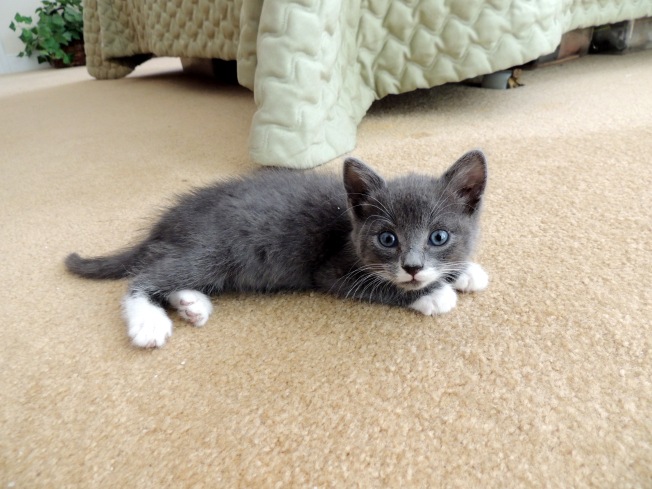 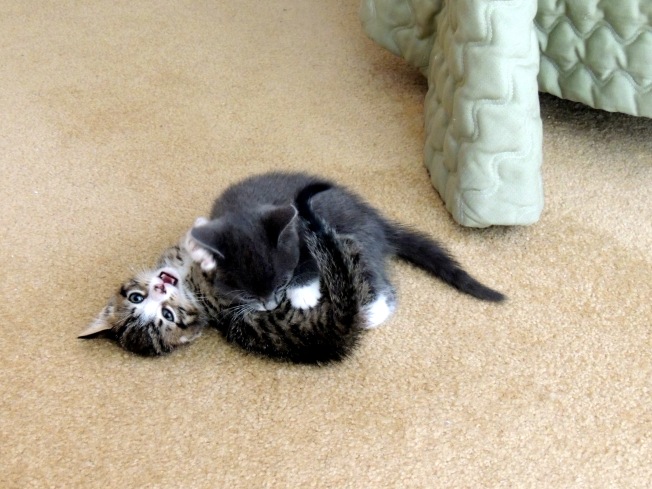 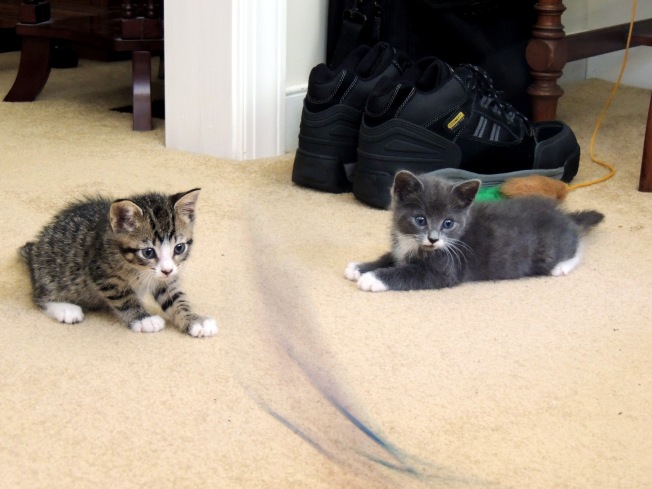 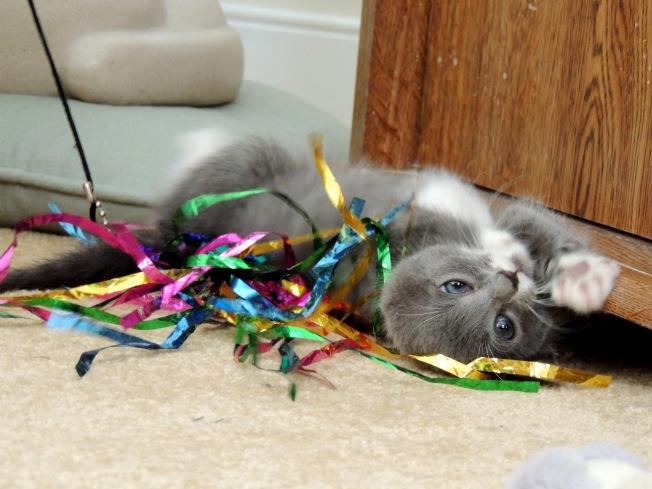 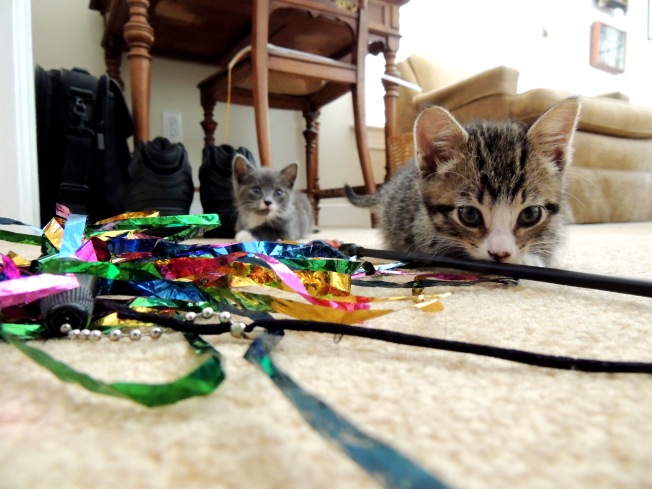 Introducing Miss Scout and Miss Misty! Making their grand debut at (we think) 5 weeks old, they could not be any cuter!!! We are also 90% sure, meh, 80% sure they are female. They are so tiny its hard to tell with 100% accuracy!

The very first thing we did was give them a bath to wash the dirt and kill any fleas or other bugs they may have had one them. I was calling this one Uno the first couple of days because she was the first one I caught. She has since been named Scout (she has to investigate EVERYTHING!). 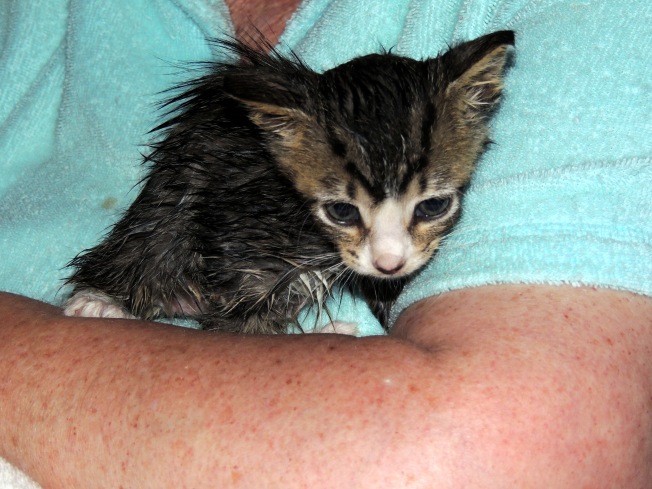 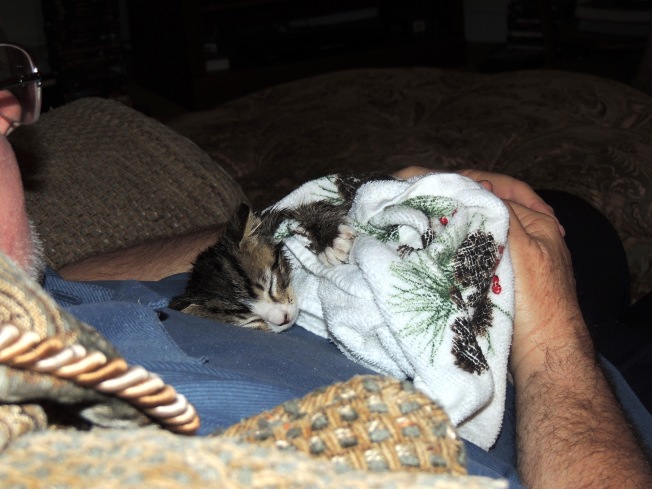 Once she dried off, she is a knock-out, can’t-stand-it, I-want-to-cuddle-with-you-forever cutie pie! 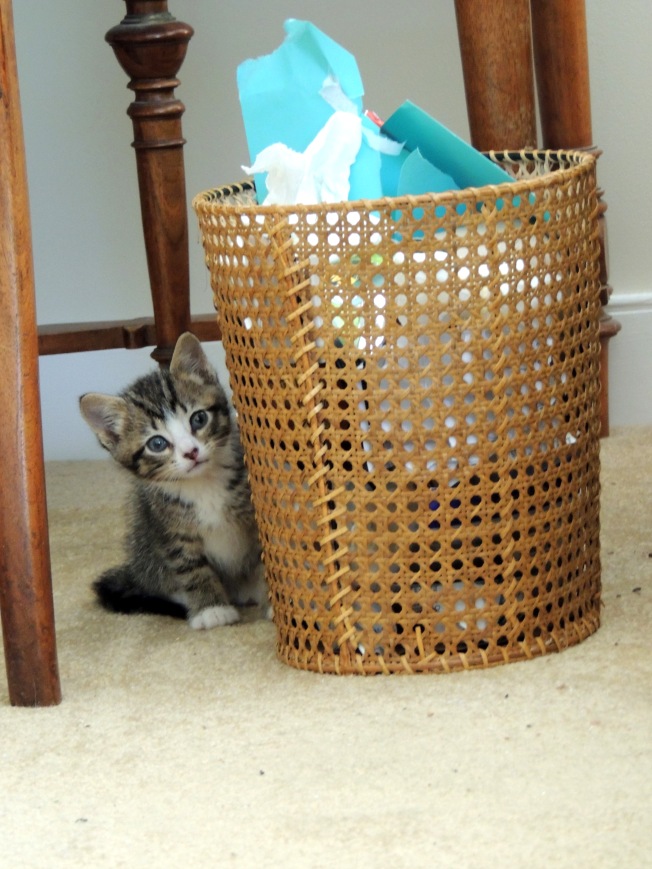 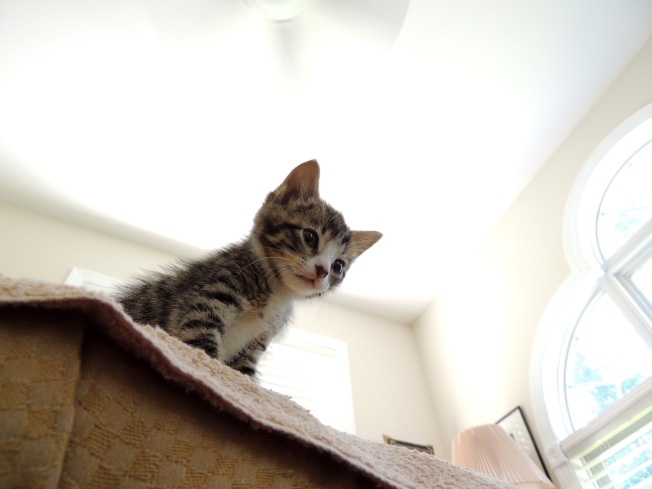 The next day, I caught her sister, whom I was calling Dos (second one caught).

Her name is now Misty and she is just as sweet and cute as her sister. 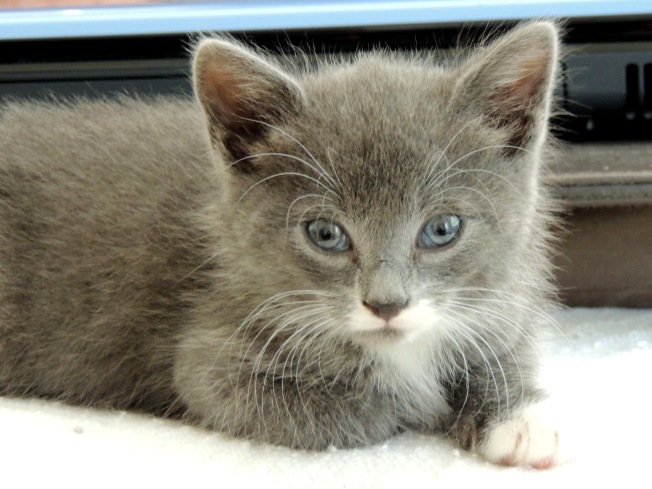 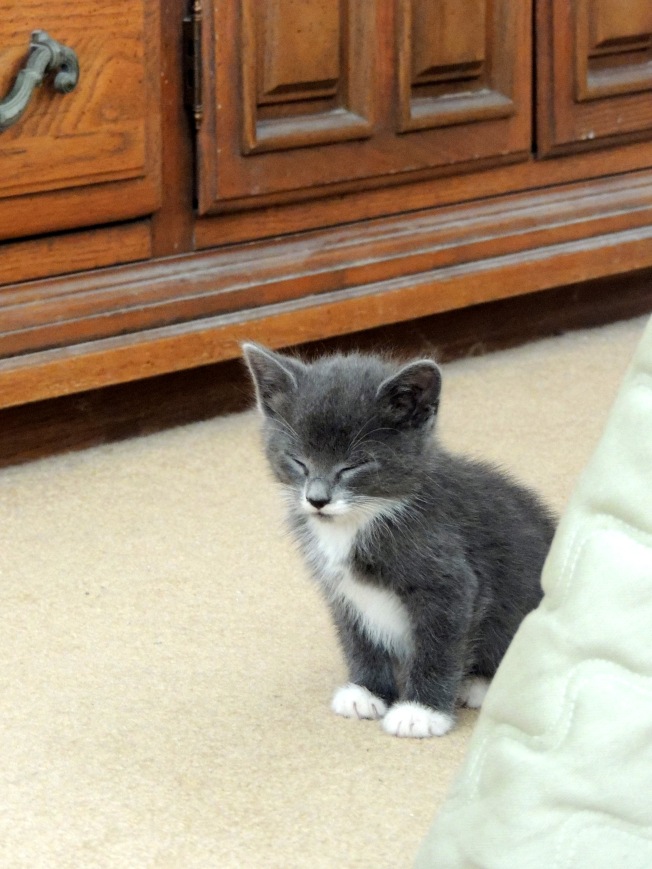 The two of them are just as curious as can be and are never far from each other. 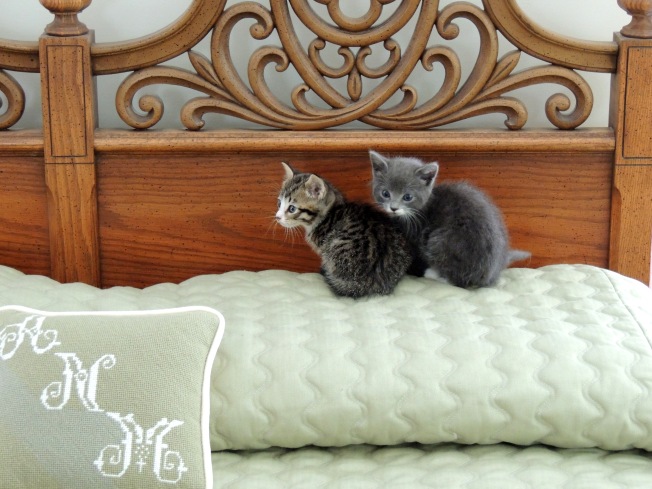 They recently learned how to play with toys and man-oh-man, do they have fun! 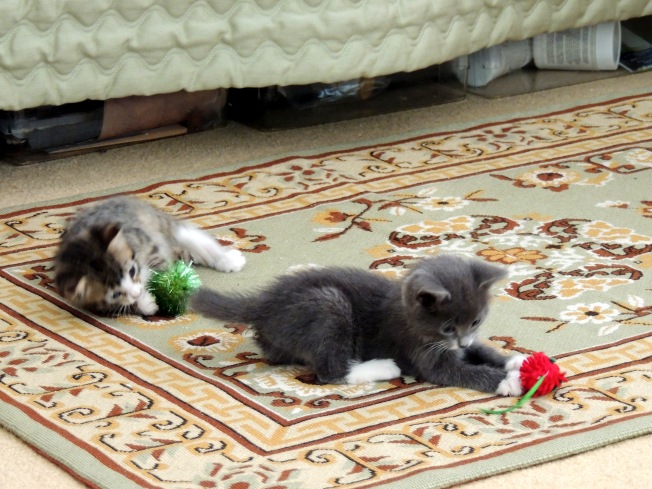 But after all, they are kittens, so it doesn’t take long before they have to take a nap.

But it doesn’t last long before they are up and ready to play again! 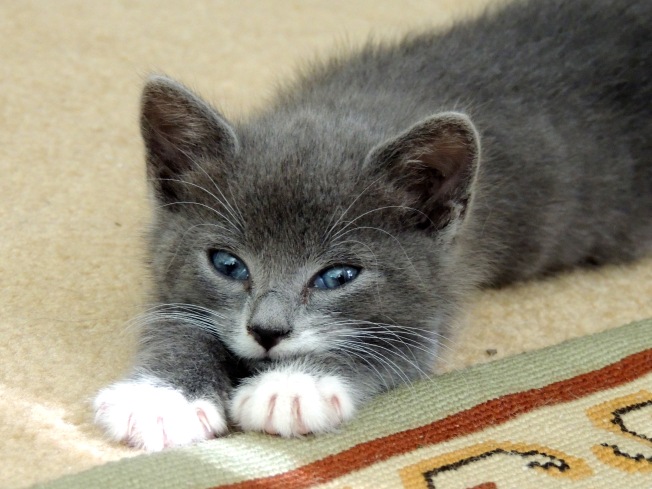 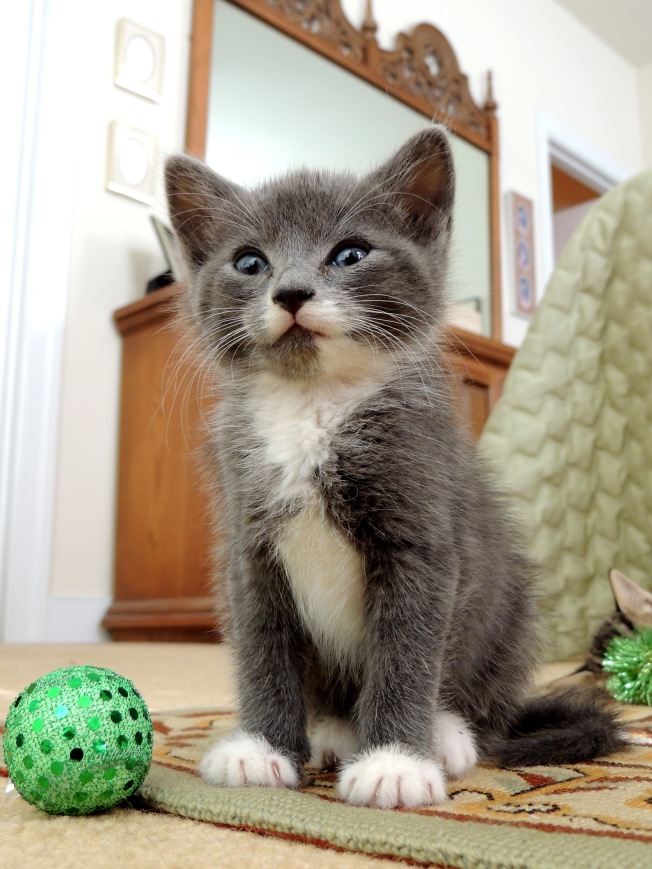 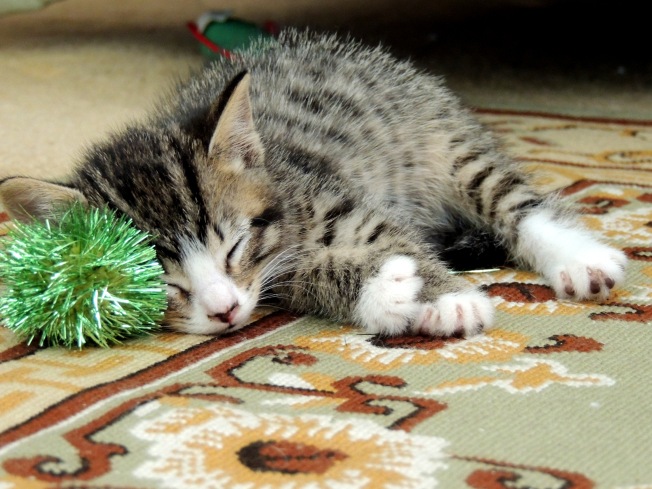 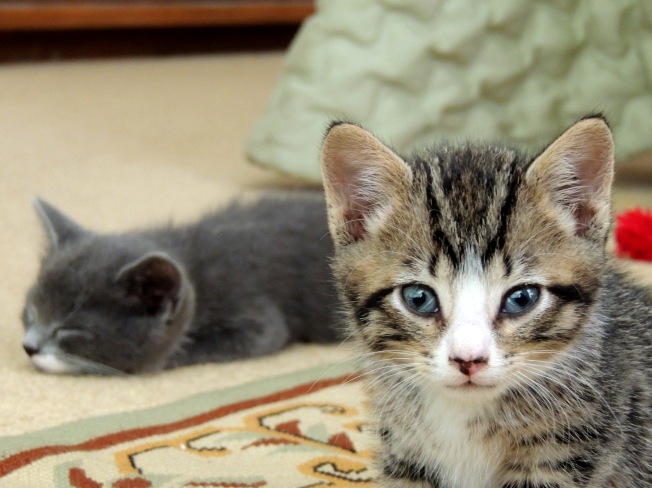 It’s another year and I have another liter of kittens in my backyard. I saw them playing on Saturday and I quickly made a plea to my family asking if they would be willing to foster them until I could get them fixed and adopted out. My two boys would not be pleased if I brought them in the house, so I needed to find somewhere else to take them. Thankfully, they agreed! And even agreed that they could handle six of them!

After careful review of all photos taken that day, I think there are actually 8 (some of the markings are different). But after showing them these cute little faces, how could anyone say no!?! 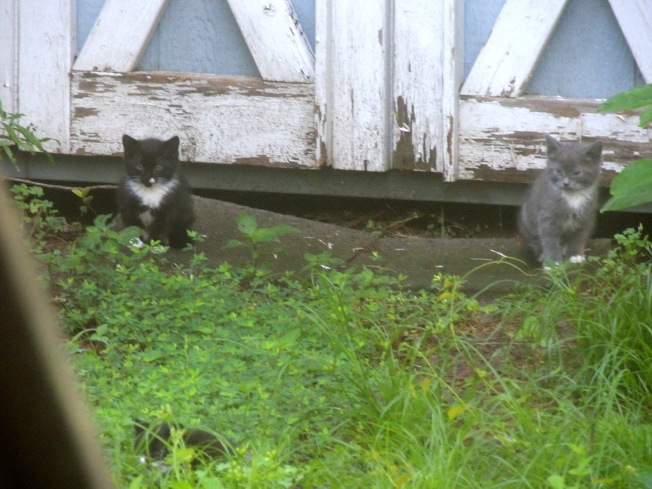 I’ve caught two so far, and will chronicle their stories separately as they will more than likely become permanent additions to the family.

The last post I wrote about doing things for cats described me crawling around under my house to make sure feral cats weren’t living under there (https://anyonecantakeapicture.com/2013/03/10/the-things-i-do-for-cats/). I do things for cats, all cats, because I love them. Stinky, smelly, cute, cuddly cats.

Shortly after that last post, I started participating in a humane feral cat program called Trap-Neuter-Return. I learned about it from an organization called Ally Cat Allies (http://www.alleycat.org/). They are a wonderful organization that not only promotes the well-being of cats, but also educates folks, like myself, on how to deal with feral cats, humanely. So, in order to help reduce the feral cat population in my neighborhood and to help these cats live better, healthier lives, I made some appointments and trapped a few of them.

The first one was a pretty little girl cat. I’m glad she was my first because the next two were scary!

While she was in surgery, the vet discovered an injury to her tail, which ended up having to be partially amputated.

But, she showed up the very next day to visit me, so her journey must not have been that traumatic. Part of the TNR program also involves clipping, or tipping, the very tip of their left year so that others know the cat has been fixed.

With one successful trapping down, I made another appointment. This guy was not very nice. I had seen him fighting with other cats so I expected him to be vicious, but he only hissed and tried to claw me a few times.

The next one was even worse. He constantly charged at me while in the cage, clawed to get out (can’t blame him for that), and was just overall unpleasant to deal with. 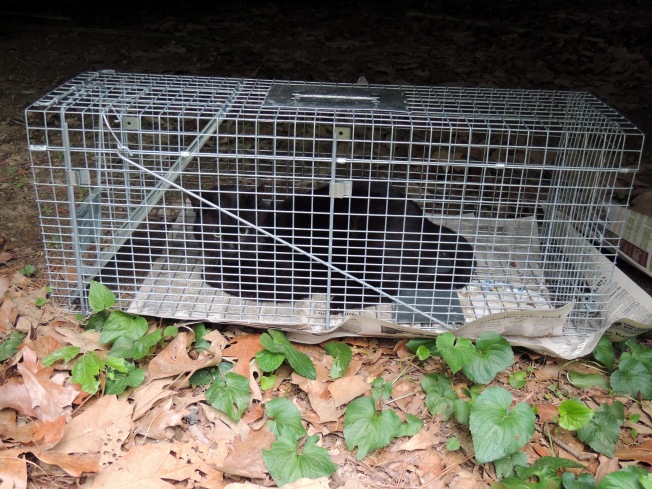 But, I did my part. One female and two males were sterilized and helped reduce the endless cycle. All three of them were fixed in May of last year (2013). I saw them for a few months afterward, but not since. They may have gone to other houses, may have been caught and not released, or may have passed. But each year, more and more kittens show up in my backyard, and I do what I can to help control the population.

Which leads me to my next post…on kittens!