Anyone can take a picture and I do mean anyone! You point and click and voila! You have taken a photograph! Your subject matter, framing, focus, light source, color contrast and balance are not important, what is important is that you’ve captured that moment. That moment that is special to you.

I have an affinity for taking shots with what I have dubbed the “peek-a-boo” effect. Your main subject is further in the distance, but to give it some texture and depth, I shoot through something, like trees or shrubbery. It just gives your photograph a bit of substance rather than just a square building against a plain blue sky.

Or add some greenery to that white waterfall against the brown rocks (while beautiful in and of itself, sometimes you need a punch of color). 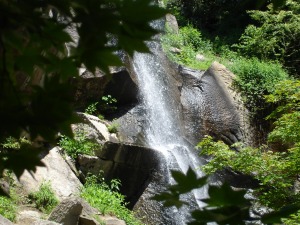 I try to get a little creative, sometimes a little too creative, and the effect my eye caught either doesn’t translate to the photograph or it just looks silly.

Point is, you don’t have blinders on, you don’t just see what is directly in front of you. Walk around, squint, squat and tilt your head and see what else your mind’s eye can capture.

One thought on “Anyone…who plays Peek-a-boo!”