“Watch your step!” was the caption I used for the first picture in my photography portfolio at the end of my Black & White Photography Studio class in college. The description read “Not caring what or where she built, Sara Winchester had this door installed on the South side of her mysterious house. This is one of the many ‘doors to nowhere,’ dead-end secret passages and stairs that lead to the ceiling at the Winchester Mystery Mansion in San Jose, California.”

The rest of these were also from that class. Not only did I shoot the photos, but I developed and printed the pictures in the dark room. I would literally spend HOURS in the studio, perfecting the black tones, making sure the whites were truly white, burning and dodging until I ran out of paper and/or chemicals. While I did have and use Photoshop just about every day for my computer graphics classes, you can’t really “enhance” an original photograph for a black and white studio photography class. So these are them, I have not manipulated them in any way. In retrospect, I should have spent more time because they aren’t “all that.” But I’m still proud of my freshman beginning. I’m sure Ansel Adams wasn’t perfect when he started out ;-)

I had to take a picture of some of the pictures (irony?), because while I did get a photo scanner as a gift, it was for smaller sizes, the 8×10 prints don’t fit. I have a printer/scanner as well, but haven’t used it since I started using this laptop and I’m not really sure where the setup disk is. Anyhoo, enjoy.

I took my camera with me to one of my Art classes and shot this while we were setting up for a project. ISO and shutter speed were a little too low which accounts for the fuzziness and graininess. But I like the candidness (lots of nesses), so it’s at the top of my favorites list.

This was one of the buildings at the North end of campus. On the photo information sheet we had to turn in with all of our assignments, I wrote “Photograph is of Old Main on Monday, September 18, 2000, at 5:30 in the evening. I chose this photograph because of the angle, the light bouncing off of the building and tree and because my grandmother wants to see photographs of campus ;-) “ I honestly think this was from one of my very first rolls of B&W film.

The next two were also from the Winchester Mystery Mansion. I think I went on that tour twice and if I ever made it back to San Jose, I would go again! That mansion has SO much history you need multiple tours to download it all.

Speaking of Northern California, I would have been remiss had I not taken a shot of the Golden Gate Bridge. Granted, one of the highlights of the bridge is the color, so yes, a B&W was probably not the best decision here, but my favorite thing about this photo is the angle. I’m not even sure how we found it, I think it was a park, or a path near the beach, but I don’t think I’ve ever seen any other photographs of this angle before. 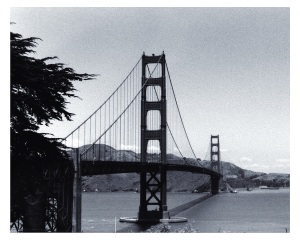 Another favorite place and photo of mine is the Palace of Fine Arts. My mom has THE picture in her office, this one is similar, but not THE picture. The one she has I think has white swans swimming around the pond ;-) Going to have to take a picture of the picture one of these days. If I ever made it back to Northern California, I would definitely have to make a side trip there for more clicks.

The next two were double practices for me. I was trying to practice with not only candid moments but also with textures. The tree bark didn’t turn out too bad, but I lost the candid part in the blur.

The candid part turned out really well in this one, but the texture of the cinderblock wall didn’t quite pop as much as I thought it was going to.

This last one was sort of a crap shoot. I was in the forest with mostly spindly (while very interesting!), aspen trees around me and I happened to look up to this huge tree. I love how the branches and leaves block out just about all of the sky. 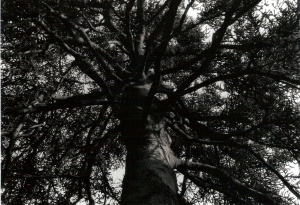 If there is one thing digital took away, it was the experience of physically making your own photographs, literally, from start to finish. The instant gratification helps make up for some of that, but if I could build a dark room in my house, I would. Keep on clicking!